Since its initial launch last year, the Cannondale Topstone Carbon has been a genre-defining bike. Taking the world of gravel riding by storm, the innovative and reliable KingPin suspension allowed people to venture into new territory on the trails, whilst maintaining the speed and agility of a drop barred bike. We fell in love with the Topstone Carbon from the first pedal stroke, as it opened up a new world of adventurous fun.

Given this bike’s runaway success, it would have been easy for Cannondale to rest on their laurels. However, they’ve stepped up the gravel game once again with the release of the Cannondale Topstone Carbon Lefty. An already exceptional bike just got more extraordinary. Promising more capability, more versatility, and more fun, we’re looking forward to experiencing the joy this bike can bring to the ride, and we’ll have our own review ready to post soon. 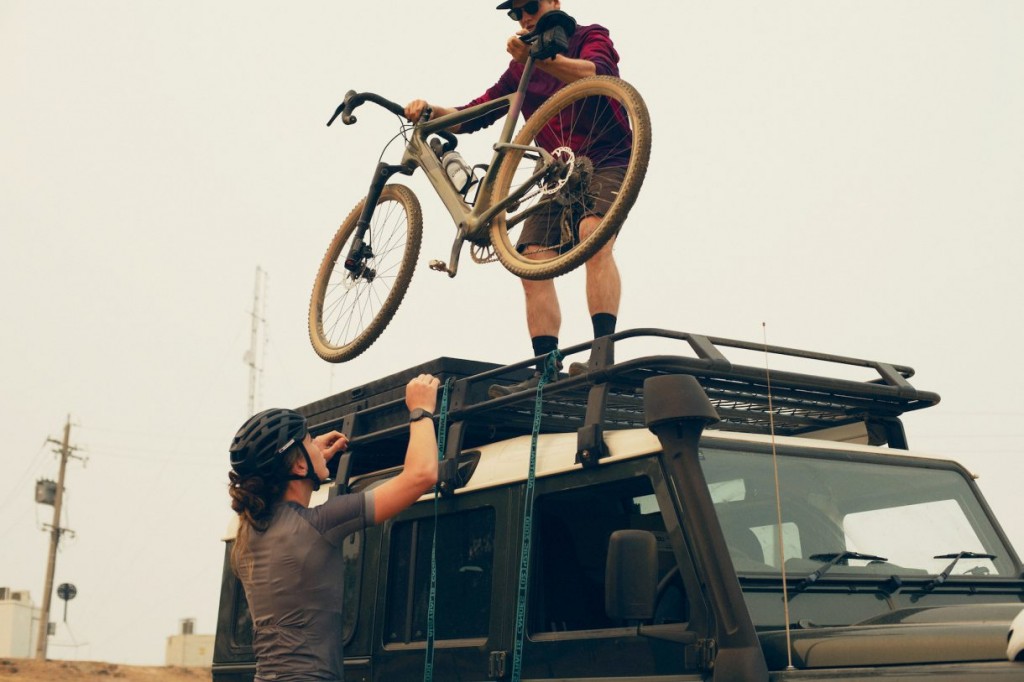 “Casting aside for a moment the arguments about all of the dedicated equipment on the Topstone Carbon Lefty, the simple fact of the matter is that this bike is an outrageous amount of fun to ride. As in, so much fun that I legitimately don’t want to give it back. So much fun that I almost don’t care how much it weighs (more on that in a bit). So much fun that I think I could even live with all of that proprietary stuff if it means you get a gravel bike that is this entertaining to ride.

…Just like I found with the Kingpin rear end on the standard Topstone Carbon, though, I’ll be damned if the fork doesn’t work just as Cannondale claims it does. Simply put, this is the best gravel-centric front suspension I’ve used to date.

As promised, it hardly moves at all when you’re motoring along on smooth ground, and unless I expected to be climbing a lot out of the saddle on paved roads, I almost never bothered to engage the manual lockout. But on dirt and gravel, it doesn’t take much of an impact at all for the fork to wake up and get to work, swallowing up all sorts of impacts that you can see, but barely feel. The fork even works much better than I expected on washboard, perhaps due to the silky-smooth movement of those three rows of needle bearings.” 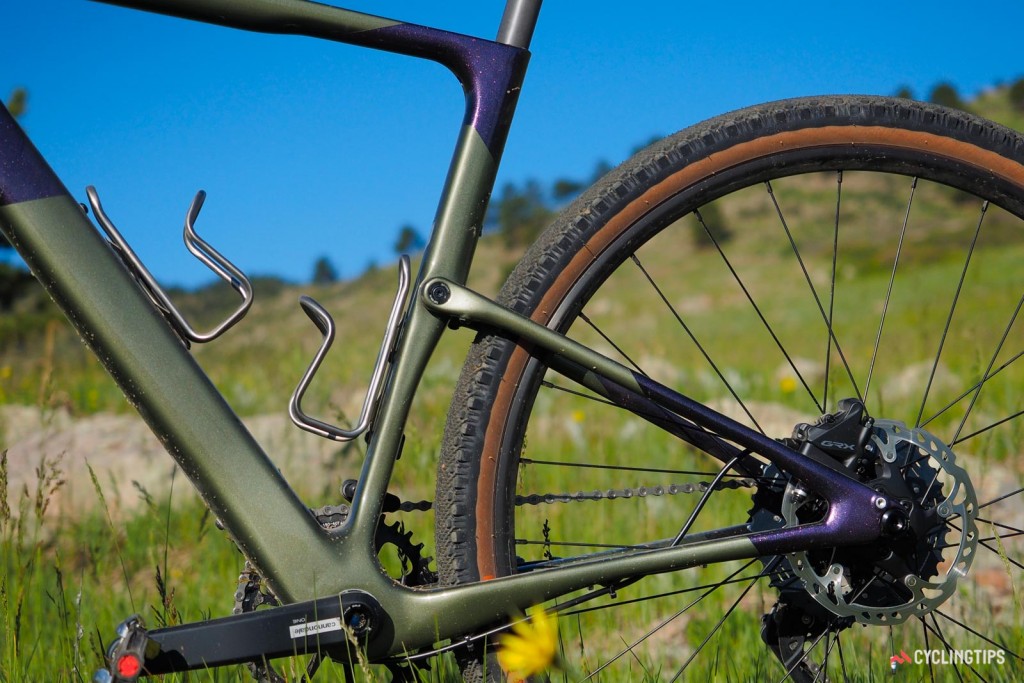 “If you’ve gotten the impression that I really like this thing, then the message has come across as intended. This bike is not only exceptionally entertaining, but a strong testament to the benefits of suspension for gravel riding when it’s done well.

Would I like it to be lighter? Sure. Is it weird to look at? Definitely. And would I be happier without all the proprietary Cannondale goofiness? Absolutely.

But holy crap, do I have a big, silly grin on my face every time I ride this thing.” 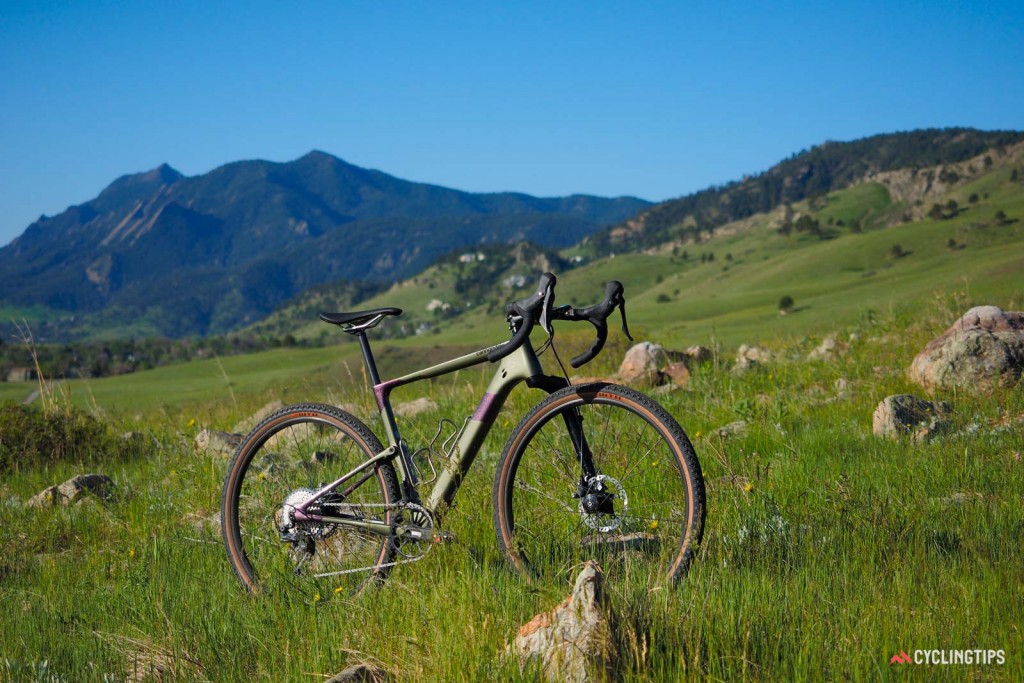 “The Topstone Carbon Lefty makes a good impression from the first few metres, accelerating readily and quickly getting up to speed. It responds directly, efficiently converting your input into forward propulsion. In comparison to its rigid 700C sibling, it’s not an all-out rocket, but for a ‘fully’ it’s more than acceptable. The KingPin system doesn’t suck up your energy and when locked out, the Lefty fork is stiff enough to attack on the sprints during your gravel rides.

After the first few off-road metres you’ll quickly notice that this is where the Topstone feels at home! Roads are only a means to an end to get out into nature as quickly as possible. On off-road terrain, the Topstone shines with playful and agile handling and stays sprightly and light-footed along winding trails. The small 650B wheels steer quickly and directly, and combined with the short 415 mm chainstays, no corner is too tight to get around.” 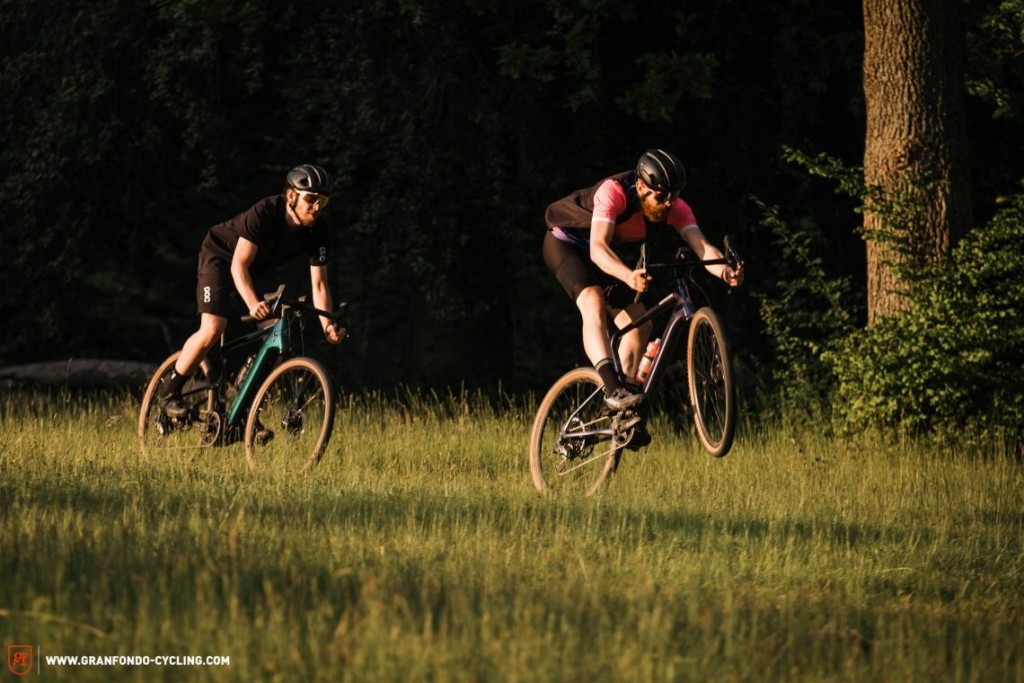 “Vibration damping at the rear is good and the KingPin system works well, allowing for comfortable hours spent in the saddle. To top it off, the HollowGram SAVE seatpost offers additional flex and comfort. The Lefty Oliver fork only uses up all of its 30 mm travel on bigger hits – you’ll notice cobbles but braking bumps on the trail or kerbs are well damped. The lockout on the fork works reliably and will even open in an emergency if you’ve forgotten about it.

…The new Topstone Carbon Left 1 delivers a fun overall concept which makes you want to head out and ride every trail. The playful character delivers a lot of fun for riders that already have gravel experience, but less experienced riders could find the ride a little too playful. This bike fills the gap left by the rigid Topstone Carbon and expands Cannondale’s portfolio, with a bike and application that wasn’t yet covered.” 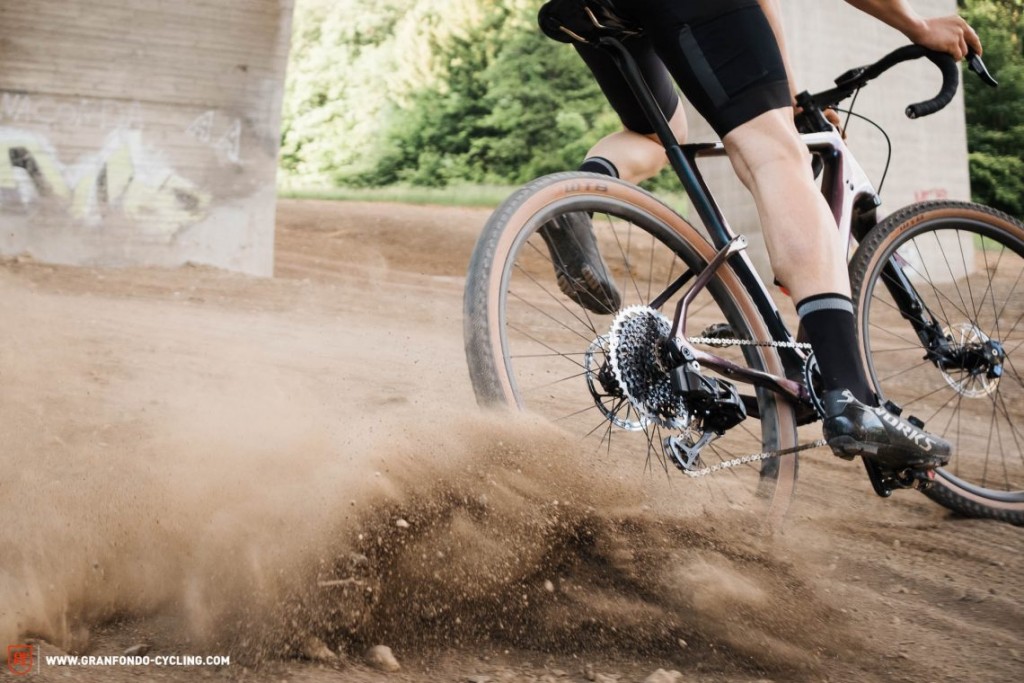 “Our mid-tier bike is a good value for what it delivers. On the tarmac the bike is buttery smooth, and the suspension is very stiff and supportive, which makes for a pleasant and rewarding ride. As we head to the roads less traveled, the minimal suspension is appreciated, even when we are just doing some light off-road exploring…

…Once you get to the top and point the bars downhill, you almost instantly forget about the effort it took to get there. The bike is responsive and, like many of the other suspension-equipped drop-bar bikes, you can fly downhill with complete confidence. The Oliver does a great job of supporting you at the top of the stroke while eating up the terrain. Suspension dive is nearly nonexistent, and there is almost too much rebound adjustment, making it easy to fine-tune the return speed.” 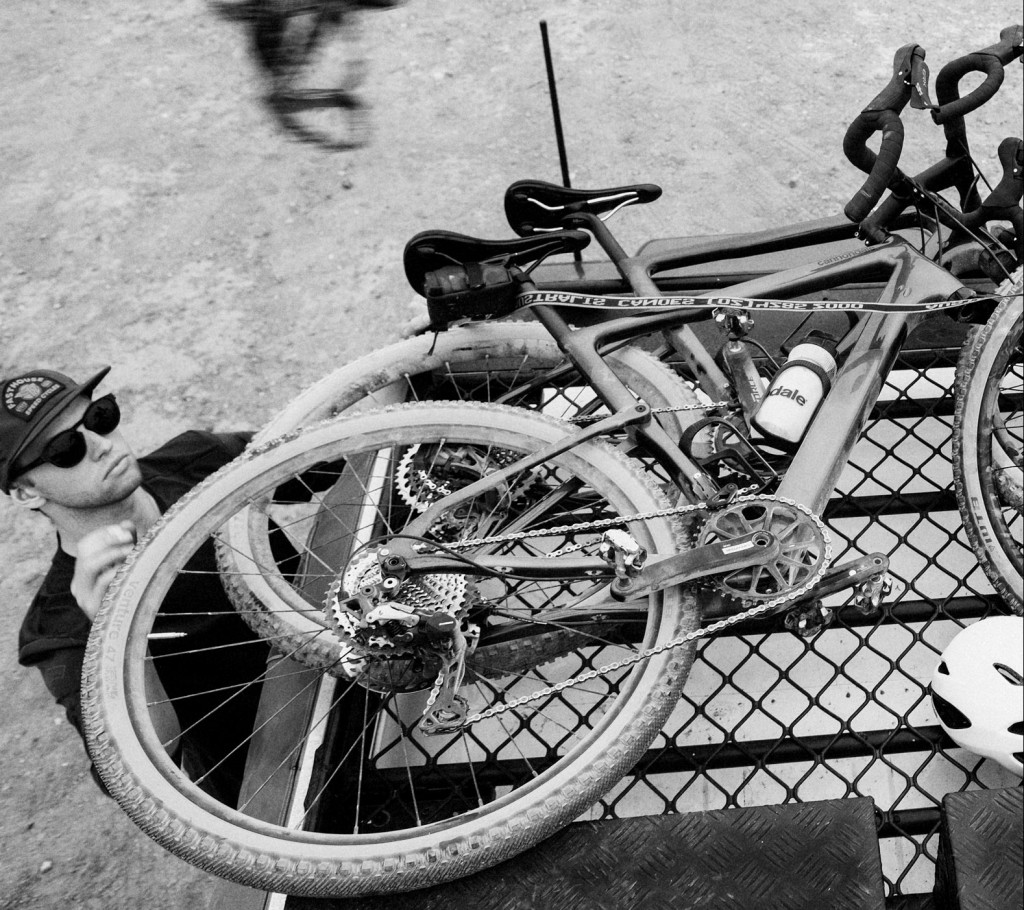 “Overall, the Topstone is a fun bike. Yes, a tad on the heavy side, but with some slight changes could be made lighter. The alloy fork weighs almost a pound more than the carbon version, but it would perform just the same in normal riding conditions.

While Cannondale still offers a family of Topstone models that don’t use the Oliver fork, clearly the world of drop-bar bikes is evolving, and this version of the Topstone just adds to the growing list of options available for those willing to explore new routes and new technology.” 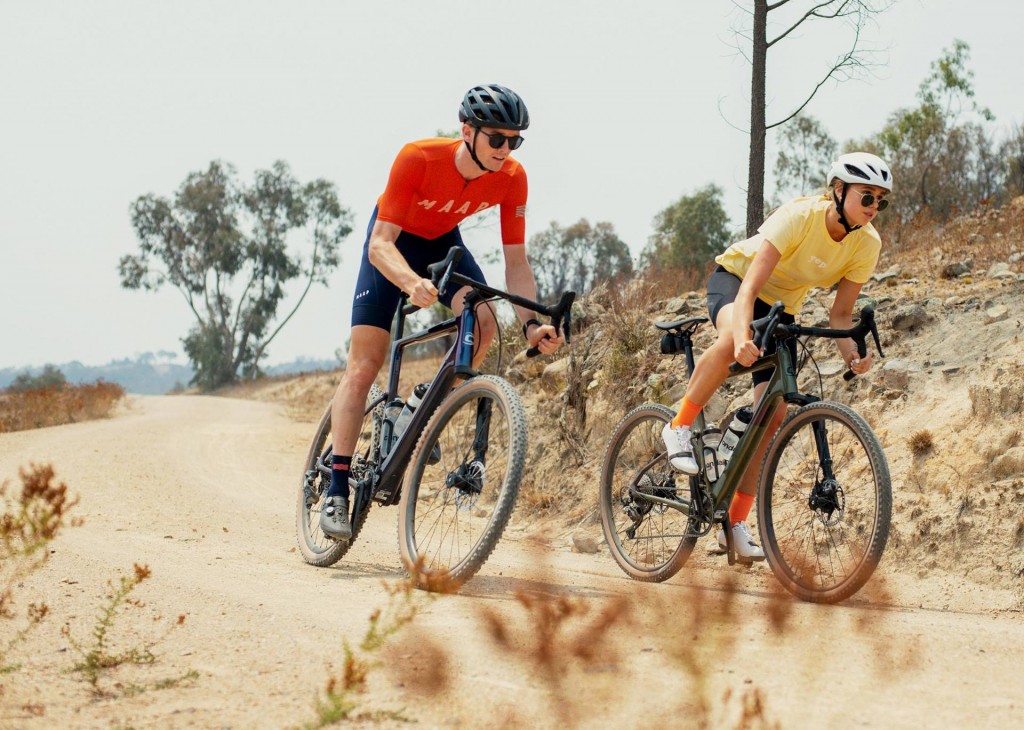 “The Topstone Carbon Lefty takes the playful, genre-blurring spirit of the Cannondale Slate and pushes it to a whole new level by adding the all-new, built for gravel Lefty Oliver fork. While gravel bikes with front suspension have been built by a number of intrepid gravel riders, only a few brands have released a bike specifically made with front suspension

…I was impressed with the bike’s performance on the road. I was expecting a very soft or bouncy ride, but the Topstone is surprisingly responsive on the road—with the Oliver Locked out it was easy to keep the bike hovering around 25 km/h mark on the flats.” 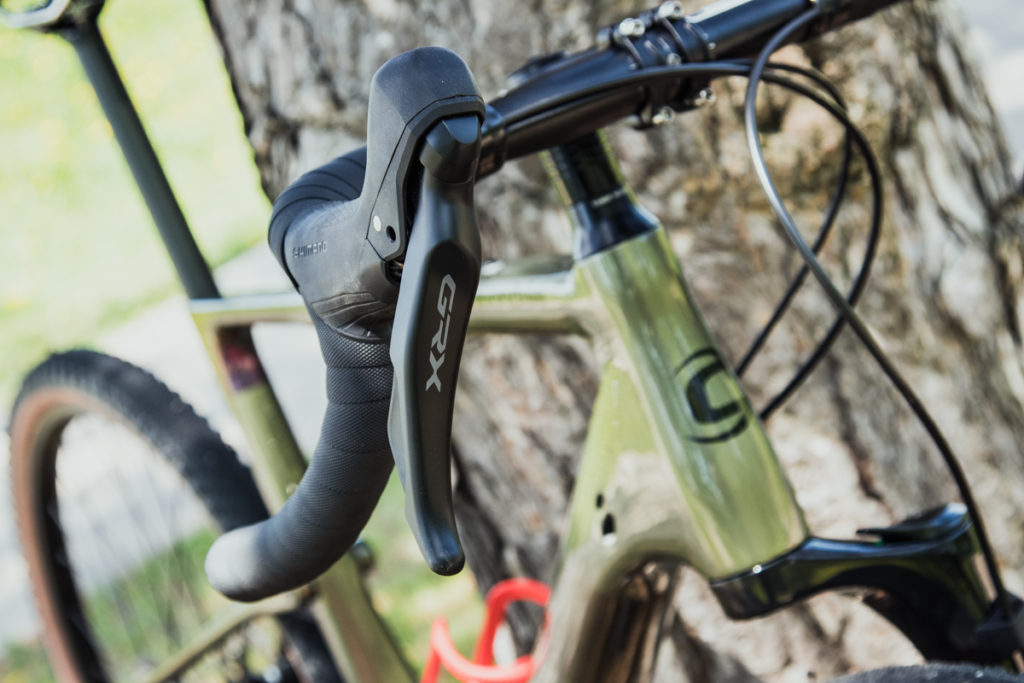 “…Where the Topstone Lefty really shines is the deep stuff. Deep chunky gravel. The stuff your road bike doesn’t like is what the Topstone Carbon Lefty eats for breakfast. The best way I can describe the sensation is like surfing a gravel wave. The 30 mm of suspension and 47c tires perch you comfortably atop the rough surface and allow you to keep the power down when a lesser bike would have you searching for traction or a smoother line. Having the Lefty up front also allows you to ride a bit faster knowing you have some travel to soak up any big potholes or obstacles that could reveal themselves.

When Cannondale launched the Topstone’s predecessor the Slate it had a cult-like following, and helped pioneer the 650B road/gravel category. The Topstone Carbon Lefty is a refined version of that bike and offers an enormous amount of versatility. The bike really feels at home on the road and in the trails, but especially surfing that deep gravel wave at higher speeds. The Topstone Lefty really opens up possibilities when it comes to planning rides. The light, stiff yet compliant ride lets you pedal comfortably all day wherever you want to go.” 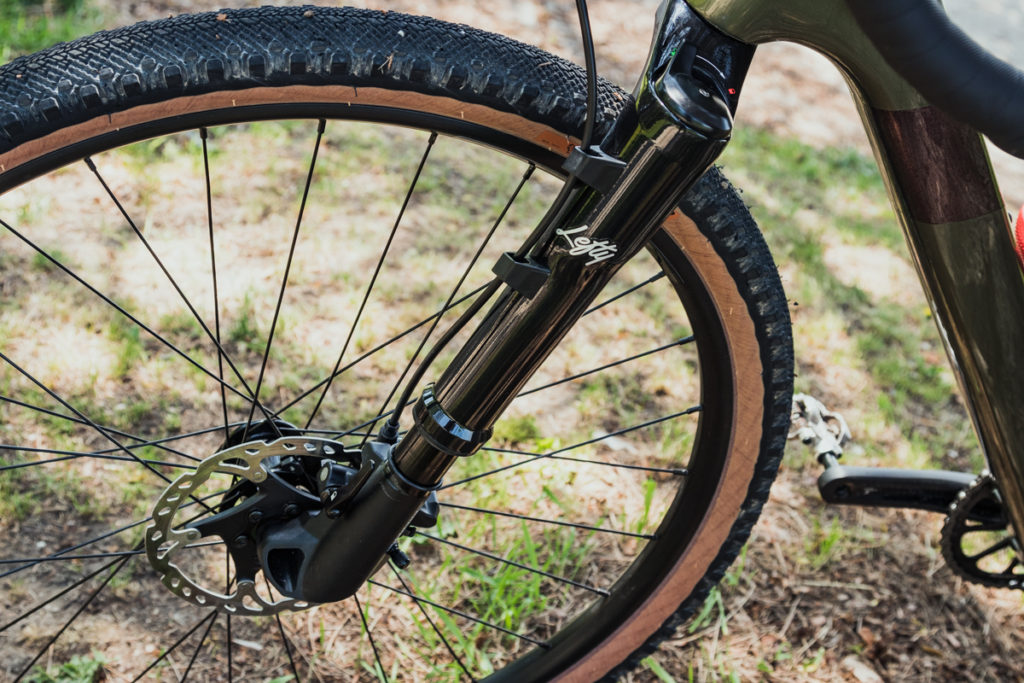